Being Prepared for the Solar Eclipse! 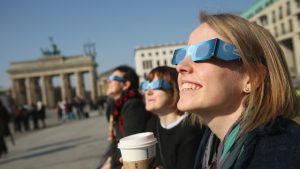 Are you ready for the total solar eclipse on August 21?

If you live in the continental US, this could be your best opportunity to see such a rare phenomenon!

What Is A Solar Eclipse?

The sun is about 400 times larger than the moon, but it’s also 400 times farther away from the earth, which is why they look the same size in the sky. When they line up with the earth just right, the moon can block out the sun, resulting in a solar eclipse. Anywhere the moon’s shadow falls, we see the eclipse, but it’s only a partial eclipse unless we’re in what’s called the “path of totality.”

What makes this year’s eclipse particularly rare and special is that it is a total eclipse. The moon’s orbit isn’t 100 percent consistent. Sometimes it’s closer to the earth and appears larger, and sometimes it’s farther away and appears smaller. When it lines up with the sun while farther away, the result is an annular eclipse, where you can still see a “ring of fire” around the silhouette of the moon because it isn’t big enough to completely block the sun.

A total eclipse only happens if the moon is closer to the earth when it lines up with the sun, and the only way we can see the diamond ring effect, the sun’s corona, stars during the day, and other amazing effects is during a total eclipse.

To learn a bit more about solar eclipses, check out the video below:

It’s never a good idea to look at the sun, and that includes during a solar eclipse. It’s already important to wear UV-blocking sunglasses outside during the brightest hours of the day even when we aren’t looking directly at the sun. The light-sensitive cells that allow us to see are like delicate instruments, and looking at the sun overloads them. You can actually burn your retinas—a condition called solar retinopathy—by looking at the sun, and it doesn’t take long.

So how can we enjoy a solar eclipse if it’s never safe to look at the sun? We just need eclipse glasses! These are special glasses designed to block out all of the harmful UV rays and the excess light so that you can look at the solar eclipse without fear of damage to your eyes.

Eclipse glasses are not the same as ordinary sunglasses, and even the very best polarized UV-blocking sunglasses are not sufficient protection for looking at the sun. In order to be approved by NASA, eclipse glasses can’t let more than 0.00032 percent of the sun’s light through them, they can’t have any bubbles or scratches, and they should include safety instructions printed on the earpieces. Do not risk your vision health by wearing eclipse glasses or using a solar viewer that doesn’t meet ISO 12312-2 international safety standards.

We hope you enjoy the Great American Eclipse!

Browse our online store for contacts and other eye care products.

You can schedule your next eye exam with us online!

Let's continue the conversation over on your social network of choice.

Let's continue the conversation over on your social network of choice.